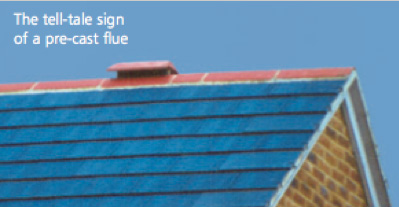 “Pre-cast concrete chimneys were built in factories and then trucked to a site and erected, as distinct from masonry chimneys that are built on site with individual bricks and mortar.  In this respect, pre-cast chimneys are unique.   However, like all masonry chimneys, they are vulnerable to seismic activity, but unlike masonry chimneys they are also subject to cracks that are induced by the interaction of moisture and a chemical additive that causes the reinforcing steel within the chimney to expand and crack  the chimney walls.  Such cracks can be small, but they are nonetheless subject to stringent repair methods.  However, if any crack penetrates the chimney wall it may be difficult to repair the chimney without costly repairs or replacement or possibly relining the chimney. For this reason, we recommend that all pre-cast chimneys be further inspected/video scanned or certified by a specialist before close of escrow.”

We went out and did a video inspection on the chimney described in the above report.  Unfortunately, there were a number of large cracks in the flue as well as one in the breast plate in the firebox.  The repair estimate was $5,000.  If you are a buyer’s broker, please make sure you ask for a video inspection of the chimney.

Two weeks ago, we were called to inspect a 1989 property in Trabuco Canyon.  It also had a pre-cast chimney, and it also had significant large cracks.  The repair estimate was $2500.  Fortunately for this homeowner, there was not a crack in the breast plate which would have made the chimney unrepairable (teardown). The new homeowner said the seller “refused” to have the fireplace inspected.

We charge $169 for video inspections.  I think that is a small investment to avoid a possible $20,000+ teardown and rebuild of the fireplace.  I don’t think many buyers would be happy to find out after they closed escrow that the inspection company had failed to warn them about this possible hazard.

Besides it being a costly repair, even more important is the fact that if the new owner decides to have a fire in the fireplace, he/she may burn down their house.

You can identify these pre-cast chimneys which are located in developments throughout California, in homes constructed between 1968-1991 because the chimneys, in most cases, will look like an off-white colored brick was used.  This is not painted but the color of the calcium aluminate cement.  Also, they will usually be located on an exterior wall of the home, and typically the chimney appears to be very narrow above the wider shoulders of the chimney, and it is much narrower than a masonry chimney.   Many of the pre-cast chimneys in Orange County were manufactured by Rampart General.