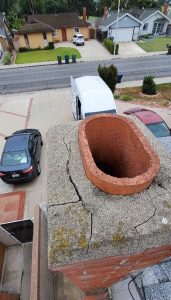 Would you want to buy a home with a fireplace and then burn down your home the first time you burned a fire because you had never gotten the chimney inspected?

There are approximately 15,000 house fires a year caused by fires that start in the chimney.

Most home buyers do not want to spend to have fireplaces and chimneys inspected, but home inspectors do not usually inspect chimneys.  If there are obvious cracks on the outside or in the fireplace, they will note those, but they will not usually get on the roof and look down the chimney, much less put a video camera down it.  Most good inspectors will suggest you have a chimney professional examine the chimney, especially if the home is older or it is a pre-cast Rampart General fireplace which are known to have structural issues.

In the last two weeks we have inspected about 25 fireplaces, most of those for new buyers.  Most of these properties were built between 1960 and 1997.  Almost all of them had some minor repairs which were needed such as cracks in the bricks, cracks in the chimney crown (top portion-see picture attached),  and no spark arrestor or cap on the chimney.  These repairs cost less than $500.  About have of them had major cracks and caps in the chimney flue.  This is a major fire hazard as when a fire burns, the heat can go through to the house beams and start a fire.  Relining the flue costs from $1700 – $2200.  Once the chimney is relined, it is safe to use again and the repair is guaranteed for 20 years.  We also inspected two properties where the repairs were too extensive for us to do such as tear down and rebuild the entire structure.

In Southern California, if you are purchasing a home that was built before 2000, realize that your home has probably gone through numerous earthquakes, and mortar and bricks are not flexible materials that can withstand earthquakes.   If you are purchasing one of these homes, invest in a video inspection that will tell you if there are cracks in the flue.  Make sure that you can see that the pictures are of the home you are buying and don’t just take the inspector’s word that cracks exist.