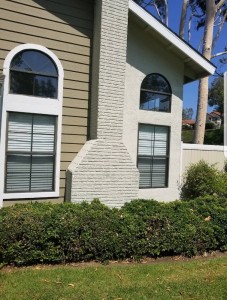 This is the first in a series of articles to warn consumers about possible fire hazards in their homes.

If your chimney looks similar to the one pictured, it is probably a Rampart General pre-cast cement fireplace.  These were manufactured in Santa Ana from the early 1960’s to the mid 1990’s.  There are whole communities of them in surrounding areas in Los Angeles, Orange and San Diego counties.  Unfortunately, due to the way they were manufactured, there are often hazardous cracks in the firebox and/or chimney which can result in a house fire if they are used.   It is recommended that these fireplaces and chimneys be inspected with a video camera (Level 2 inspection) to make sure they are safe.

If the cracks are detected and fixed before they become too extensive, the fireplaces can then be used safely.  We can usually fix problems with these fireplaces, but sometimes the homeowner has not gotten them repaired when the cracks were small, and the only recommendation we can make is to tear down the chimney and fireplace and rebuild it.  We do not tear down and rebuilt chimneys, so it is not something we like to tell a homeowner.  If the chimneys are allowed to deteriorate to a point where they are not repairable, the value of the home can be impacted.  A realtor told us recently that he had a number of sales fall through because of these fireplaces which had not been repaired.

Call us for a video inspection and mention this posting for a $25 discount.  You can also email (luckysullysweep@aol.com) or text us (714-342-7415) a picture of your chimney so we can tell you if it is a Rampart General.