The National Fire Safety Institute recommends that all chimneys and fireplaces be inspected when a property is sold. 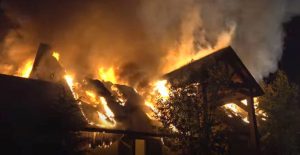 One of the major causes of home fires in the winter are fireplaces and it is reported that there are about 15,000 house fires caused by fireplaces and chimneys in the U.S. every year.  In 2020 Rachael Ray, TV Host, had her large home burn down, reportedly due to gaps or cracks in the chimney.  This was despite getting the chimneys swept regularly.

Many people, including some chimney sweeps, think that just dropping a handheld mirror down the chimney will detect hazards.  In most cases it will not.  We have been to properties where a chimney sweep had been there before and said the property was safe, but there were major cracks and gaps in the flue which are a severe fire hazard.

We used to charge $200-$300 extra for a video inspection of the inside of the chimney, but starting about 5 years ago, we started to include this with all our inspections and sweeps.  There are rare cases where this is not possible or necessary.  We review the video with the customer if there are issues and also send them a copy so they can see the issues themselves.  We try to take the videos so the customer can see that it is their property that is being filmed, not just a photograph which could be a different property.

If you are buying a property, especially one over 30 years old, don’t take a chance that the chimney is cracked and hope that it isn’t.  Home fires can be deadly.  Make sure your chimney inspection includes a video inspection of the inside of the chimney.  The regular home inspectors do not do this.  They often spot hazards, but this one is usually missed.  We have found that approximately 30% of homes built between 1950 and 1990 have cracks in the flue. These can usually be repaired, and we provide that service for substantial less than most of our competitors.

Even if you are not selling your home, if your chimney has not been inspected with a video camera in the last 5 years or so, it is a good idea to get it cleaned and inspected.  If you don’t burn fires, then there is no hazard, but getting minor cracks detected early means that repairs will cost less.

Lucky Sully Chimney Sweep has been in business since 2004.  We service all of Orange County and parts of Los Angeles (especially Long Beach area), southern San Gabriel Valley and parts of the Inland Empire.  We provide free estimates for repairs.  Please call us at 714-342-7415, or email us at Luckysullysweep@aol.com.

https://luckysully.com/wp-content/uploads/lucky-sully-chimney-sweep-logo.png 0 0 writer https://luckysully.com/wp-content/uploads/lucky-sully-chimney-sweep-logo.png writer2022-05-03 19:51:372022-04-26 20:14:32What a Home Buyer Needs to Know About Chimneys and Fireplaces